Wekiva State Park is only a thirty minute drive from our home in Orlando. Although we’ve canoed the beautiful Wekiva River, we hesitated to reserve a campsite because of the park’s reputation as a black bear habitat. Part of our concern involved our beagle, Buddy. When we discovered dogs are permitted on the trails, we decided to go after all. If it was very dangerous, surely the park wouldn’t allow pets.

A friendly ranger greeted us at the entrance. “Be aware, the bears are very active right now.” My husband, Herb, nodded his head and we continued to the campground to set up camp. “What does that mean?” I asked. “Are bears roaming through the campground?” Herb didn’t answer.

After we parked our trailer, my husband drove less than a mile to the nearest Publix to buy firewood. I walked Buddy around the campground, and met a lady on the road with her pet.

“Hey, what’s going on with the bears around here?” I asked.

She kept a tight grip on her dog. “Last week a bear approached the campground dumpster. The rangers killed it.”

I sighed. “Oh, that’s too bad.” It seemed like I should feel sorry for the bear. After all it was probably just looking for food. I walked over to the dumpster to judge its location in relation to our campsite.  It was not a pretty sight. Have you ever seen a pretty dumpster?

As you can see both dumpsters have secure latches on the side to deter bears.  It does look like a bear tried to raise the lid off the top.

I read the rules on the sign. Between the hours of 8 p.m. and 8 a.m. the dumpster is closed. I wondered if the ranger padlocked the opening to keep people from bringing their trash. Then I realized someone must have left their garbage outside the dumpster when it was “closed.” Talk about ringing the dinner bell for the bears. “Come and get it bears, I’m going to make it easy for you. And hopefully, you won’t eat me!”

I was very glad the dumpster wasn’t close to our campsite.

When Herb returned with the firewood, I told him everything I’d learned about the dumpster. He stayed outside with Buddy and I went in the trailer to make dinner. Later, while we were relaxing around the campfire, Herb casually mentioned that a neighbor came by with some news. Earlier that day, two pygmy rattlesnakes were crawling right where we were sitting.

I immediately lifted my feet off the ground. “This place has more wildlife than anywhere else we’ve camped so far. And we’re practically in our own backyard!”

I’m happy to report that we didn’t encounter any bears or snakes during the four wonderful days we camped at Wekiva. 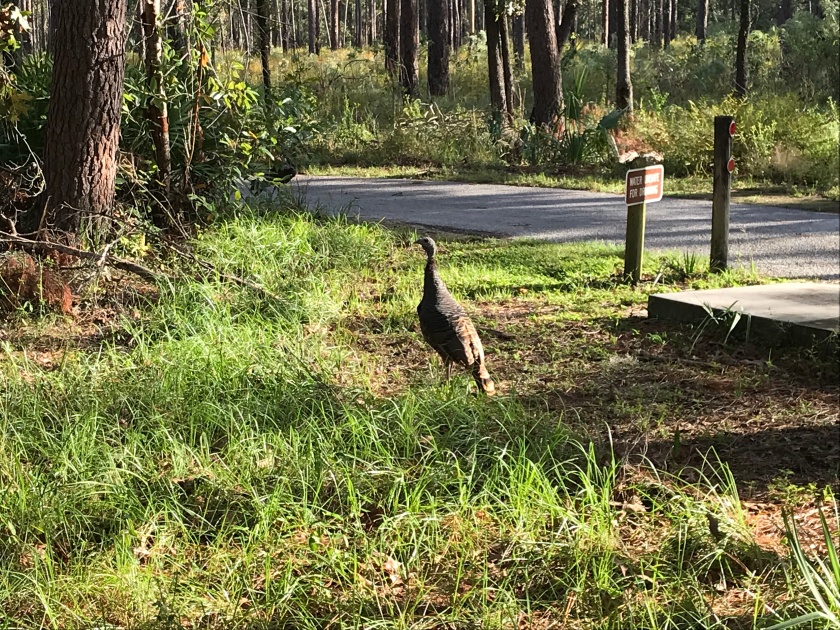 We did meet a wild turkey!

After we returned home, I researched a few facts about the Florida black bear.  Forty years ago they were endangered, with a population of only three hundred.  Today there are estimated to be 4,350, and they are no longer considered threatened. This fact surprised me. I thought the development of Florida’s urban areas would have the opposite effect. During the era of the black bear’s decline it was legal to hunt them. Now they can only be hunted during specific times designated by the Florida Wildlife Commission. In 2016 an authorized bear hunt lasted two days. During that time 306 bears were killed. Bears are more likely to be seen in forested wetlands, but can be found anywhere in Florida. 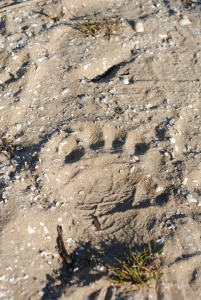 2 thoughts on “Trailers, Trash, and the Black Bears of Wekiva”