This summer my daughter Jenny invited me to visit  Big Cat Rescue in Tampa. I hesitated to go. After all, what would Buddy (our beagle) think? He and I share a common opinion; who needs cats anyway?

Jenny on the other hand, is the proud owner of two cats (the domesticated variety of course). In an effort to overcome my prejudice toward felines I joined her for a tour. In the process I gained respect for a cause I’d never really considered. Big Cat Rescue is a leader in the fight to stop the abandonment and abuse of exotic cats.

The main cause of exotic cat abandonment is the “pet trade.” This trade evolves around the misconception that big cat cubs make cute pets. People purchase lion, tiger, bobcat, leopard, or cougar kittens from breeders. The kittens are manageable for a year or two, but as they mature problems arise. Often the big cats only bond to one family member and are aggressive toward the rest of the family.

When the pet owners realize they can’t handle their “wild” cat who is growing bigger everyday, they may respond by chaining it up or housing it in a small cage. Eventually they might turn to Big Cat Rescue to take the animal off their hands. The sixty-seven acre property also houses big cats who have retired from performing acts, or were given up by roadside zoos. 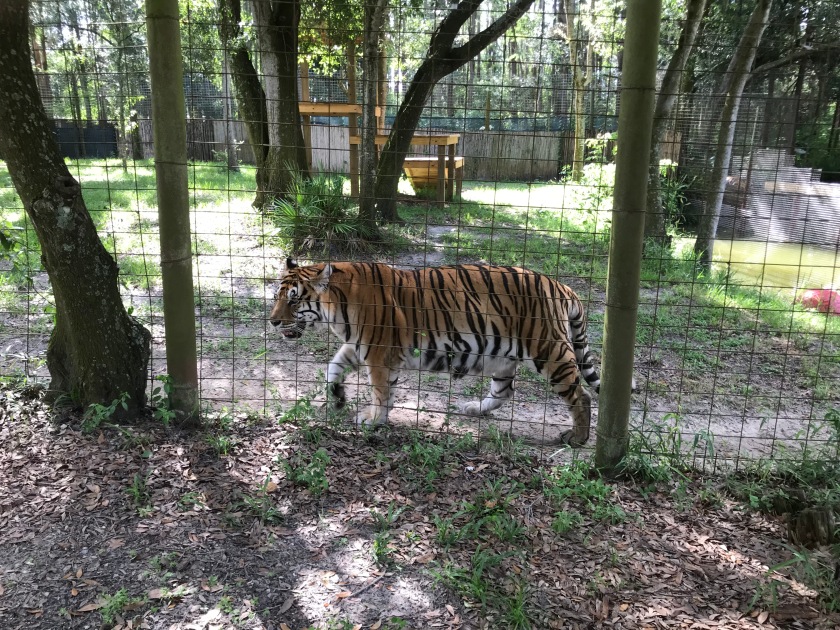 During our ninety minute guided tour I learned the sad story behind many of these beautiful animals. I met a tiger named Andy who arrived at BCR in 2016. Andy came from Serenity Springs, a zoo in Colorado which was closing its facility. The zoo was known for offering tiger cub petting sessions and used Andy to breed kittens.

I was impressed at the volunteer staff who work tirelessly to feed the cats and clean their living quarters. Although fenced for protection, each living space afforded plenty of room for the cats to roam. Andy’s living space included a large pool where he enjoyed a swim. 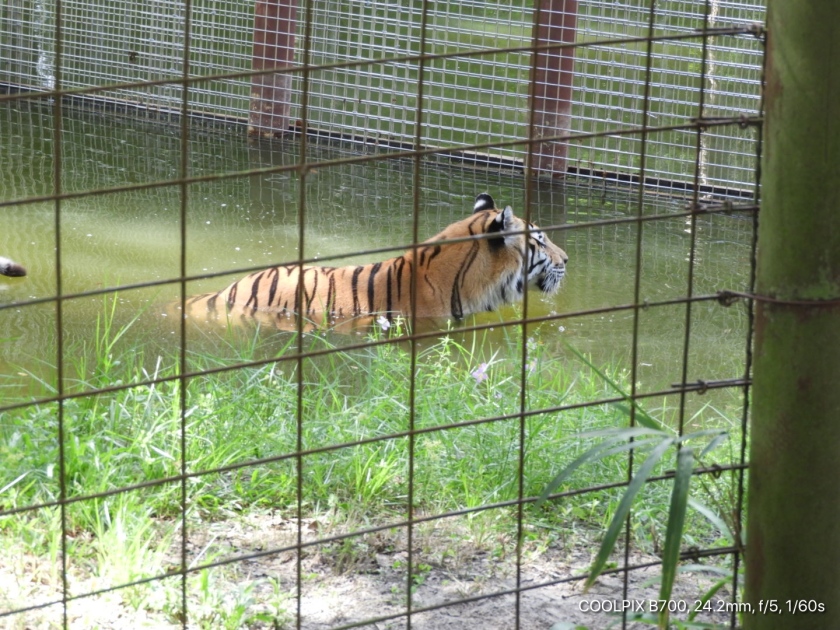 Big Cat Rescue has its own animal hospital. A bobcat with numerous broken bones was discovered in Orlando laying by the side of the road on Christmas Day. She was taken to BCR and given the name Noel. BCR contacted a vet with the Tampa Humane Society who provided the necessary treatment. Noel spent six months recovering at BCR and was eventually released to live in the wild at Orlando Wetlands Park.

The Accidental Founding of BCR

Founder, Carole Baskin states, “I never set out to start a sanctuary. It happened partly by accident, then largely through a process of evolution.” Carole’s journey with exotic animals began at a llama auction in 1992. A man walked in seeking a home for a six month old bobcat on a leash.  Carole’s heart went out to the young bobcat. She named her Windsong and brought her home.

True to her natural instincts, Windsong only bonded with Carole. Her husband wanted his own bobcat kitten and the couple set off for Minnesota to buy one. They found a fur farm which sold a few bobcat kittens for pets, but slaughtered any they couldn’t sell to make money in the fur trade. Carole and her husband were outraged to realize the kittens might be slaughtered and bought all fifty-six! They loaded all the kittens in their vehicle and drove them to their home in Florida. It was difficult to care for the bobcats in their home, so Carole and her husband moved them to the property where BCR is presently located.

Carole admits she and her husband made a lot of mistakes. Although they were trying to save bobcats from destruction, the couple was actually supporting the pet trade by buying bobcats and reselling them as pets. Their interest in rescuing bobcats grew to include additional species. Like many in the big cat pet trade, Carole believed she was preserving endangered species. Over time she realized she was dooming the animals to a life of captivity and abuse. Although she thought she placed kittens in “good homes,” many were returned to BCR when they were no longer cute.

Since 2004, BCR no longer breeds or buys big cats and is a non-profit organization. The mission statement of BCR is to give big cats the best care possible and educate the public on the plight of these animals so that someday there will be no need for a sanctuary to exist.Today Big Cat Rescue has become a voice in support of increased legislation to insure that lions, tigers, and other dangerous big cats do not live in abusive situations or threaten public safety. For more info go to this link.

After my tour I can say I have a real sense of appreciation for the work of Big Cat Rescue.  But rest assured Buddy, you are still number one with me.