Lisa regularly flies from Orlando to Texas to visit her elderly parents. However, her most recent trip was one she’ll never forget. On August 24 her plane to Dallas was delayed. She missed her connection to Beaumont and was forced to take a later flight. After spending hours waiting in the Dallas airport, she wondered if it was an omen of bad things to come.

Lisa was aware of Hurricane Harvey’s location in the Gulf of Mexico but didn’t think it would affect Beaumont.  Her parents, Glenda, 84, and Lindy, 90, had a relaxed attitude.  At their age they’d seen many storms come and go along the Texas coastline. The weather forecast predicted thirty inches of rain for their area. Her parents thought it would never happen. Still, Lisa encouraged them to go shopping for extra bottled water and food, just in case they might not want to go out in the rain.

On Saturday, August 26, Hurricane Harvey made landfall in Corpus Christi and looked like more of a threat for Beaumont. Lisa encouraged Lindy to fill up his gas tank. He did. That night bands of rain arrived and continued off an on for four days. Lisa emptied the rain gauge in the yard every time it was full. They received thirty- five inches of rain on their property.  The family was amazed their home did not flood, nor did they lose power. Every time the water would rise on the patio, the bands of rain would stop long enough for the water to recede.  Lisa attributes this miracle to the prayers of friends and family.

On Thursday morning she turned on the faucet to make coffee and there was no water.  Flood waters from the Natchez River contaminated the city water treatment plant. The local news reported the water would be off for several days. Lisa and her parents were resourceful. They gathered buckets and coolers and put them in the back of Lindy’s pickup truck. Lindy drove to a nearby soccer field which had become a retention pond. 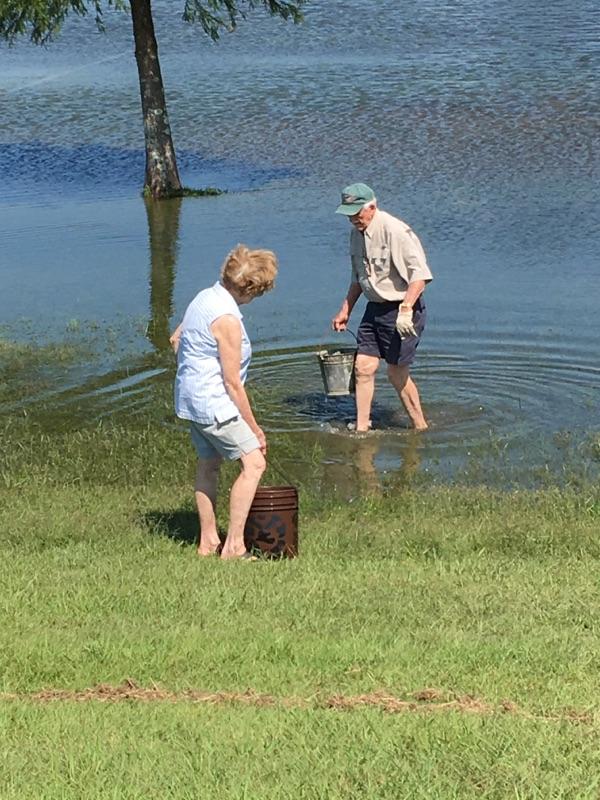 Lisa helped her parents carry buckets of water from the flooded soccer field to the truck. Back at home, they used this water to flush the toilet. They still had bottled water to drink, but wondered how long it would last.  Without water, it was necessary for every store and restaurant to close.

Originally Lisa planned to visit Beaumont for five days. With the airport closed, and roads flooded, she was stranded. Still, her main concern was the welfare of her parents. She knew they had to find a way out. If they could evacuate to her sister’s home in Dallas, her parents would be safe and she could get a flight back to Florida from there. She managed to access a Texas Department of Transportation website that posted passable driving routes.  One road, Highway 90, was passable.

Friday morning Lisa, Lindy, and Glenda threw their suitcases in the back of Lindy’s truck and started driving. The trip was frightening at times, especially when they drove onto a bridge across the flooded Trinity River.  A drive which  normally took six hours turned into nine, but they made it. Along the way they watched scores of vehicles coming toward Beaumont to help people evacuate. The lack of water forced those in hurricane shelters to leave.

Lisa flew home from Dallas to Orlando September 2.  Within two days she and her husband Bill were busy preparing for Hurricane Irma. Because of her experience with Harvey, Lisa’s first thought was to stock up on bottled water. Panic ensued. Publix and CVS had no water left on the shelf. She bought empty containers at Target, filled them with water and placed them under their carport. Hurricane Irma was a long time coming, and the path kept changing. Finally, the morning of September 11 hurricane force winds hit Orlando. Lisa and Bill’s power went out and stayed out for a week. City water was unaffected.

Between the two hurricanes, Lisa states her experience with Irma was much more difficult. “Living without air conditioning in Orlando’s heat and humidity is a big challenge.” By Friday night she and Bill checked into a hotel. Their power came on the next day.

Prior to all of the hurricane madness, Bill and Lisa had planned to take a cruise scheduled to depart from Puerto Rico. It was cancelled of course, by another storm named Maria. Lisa was fine with the cancellation. “I didn’t want to see a third hurricane.”