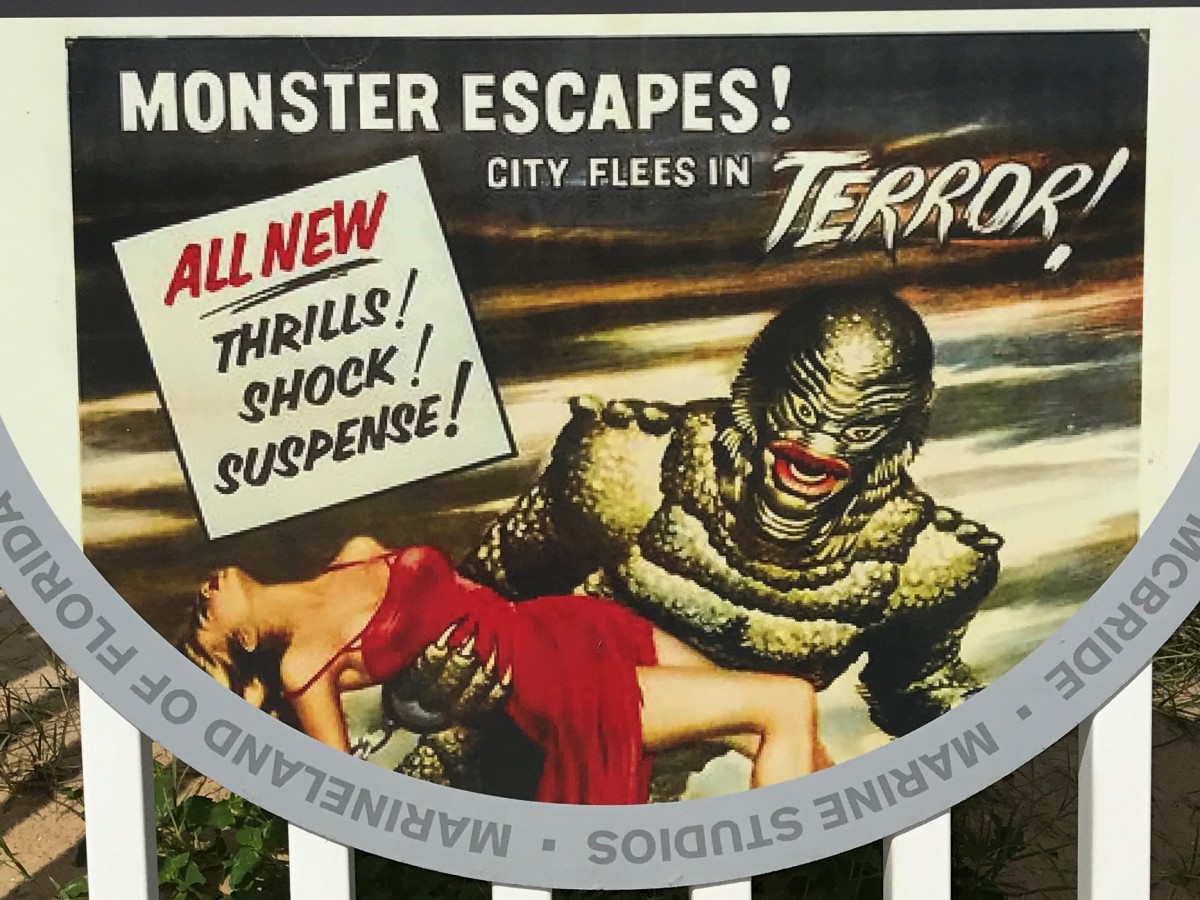 “Science couldn’t explain it… but there it was, alive in the deep waters of the Amazon. A throwback to a creature that existed one hundred million years ago.” So begins the opening remarks from the trailer, The Creature of the Black Lagoon.

When My husband was growing up he loved to watch the horror movies of the 1950’s.  Even today his eyes seem to light up whenever he talks about the time his parents brought him to Florida for a vacation. They visited Marineland in 1962. Back then two of his favorites movies were The Creature of the Black Lagoon (1954) and it’s sequel, Revenge of the Creature (1955). He couldn’t believe he was seeing the studios where scenes from both of his favorite movies were filmed. It’s something he will never forget.

This summer we made a return trip to Marineland.  We learned the attraction first opened as Marine Studios in 1938. It was designed to be a location for Hollywood filmmakers to shoot underwater footage for movies and TV shows, including Sea Hunt (1958)

Naturally underwater movies call for animal actors. In addition to making films, Marine Studios wanted to give the public an opportunity to see and learn about bottlenose dolphins. During the 1940’s public dolphin feedings evolved into dolphin performances. Keepers discovered how high a dolphin can jump.

During the 1950’s and 60’s the dolphin performances drew crowds of adoring fans. A favorite celebrity, Nelly, starred in TV shows. Nelly was born at Marine Studios in 1953 and lived under human care for sixty-one years. As dolphin performances continued to grow in popularity during the decades of the fifties and sixties, the focus of Marine Studios changed. It became more of an animal theme park with a new name, Marineland.

As we strolled through the present day facility I was taken by its beautiful location. The dolphin pool is located in close proximity to the beach. Over the years Marineland staff have rescued hundreds of stranded whales and injured marine animals.

However, Marineland’s location also contributed to its demise.  As the decades passed, salty air eroded the buildings. Destruction from two hurricanes made it necessary to close the park in 2004. In addition, Marineland experienced a decline in admissions after Sea World of Orlando opened in the late seventies.

During the next two years Marineland constructed a new facility dedicated to education and human/animal interaction instead of animal performance. In 2011 Marineland was acquired by the Georgia Aquarium and renamed Marine and Dolphin Adventure. The attraction offers dolphin encounters, summer camps, and field trips for school groups. The Behind the Stage Tour takes visitors below deck where they can view historical exhibits from their years as a film studio. We were surprised to discover the attraction sells a wedding package for avid dolphin loving couples.

We concluded our visit with this snapshot taken at a photo spot, a memento of our return to the hallowed ground of childhood memories.

My previous blog about the Florida Citrus Tower shares another piece of Florida history.