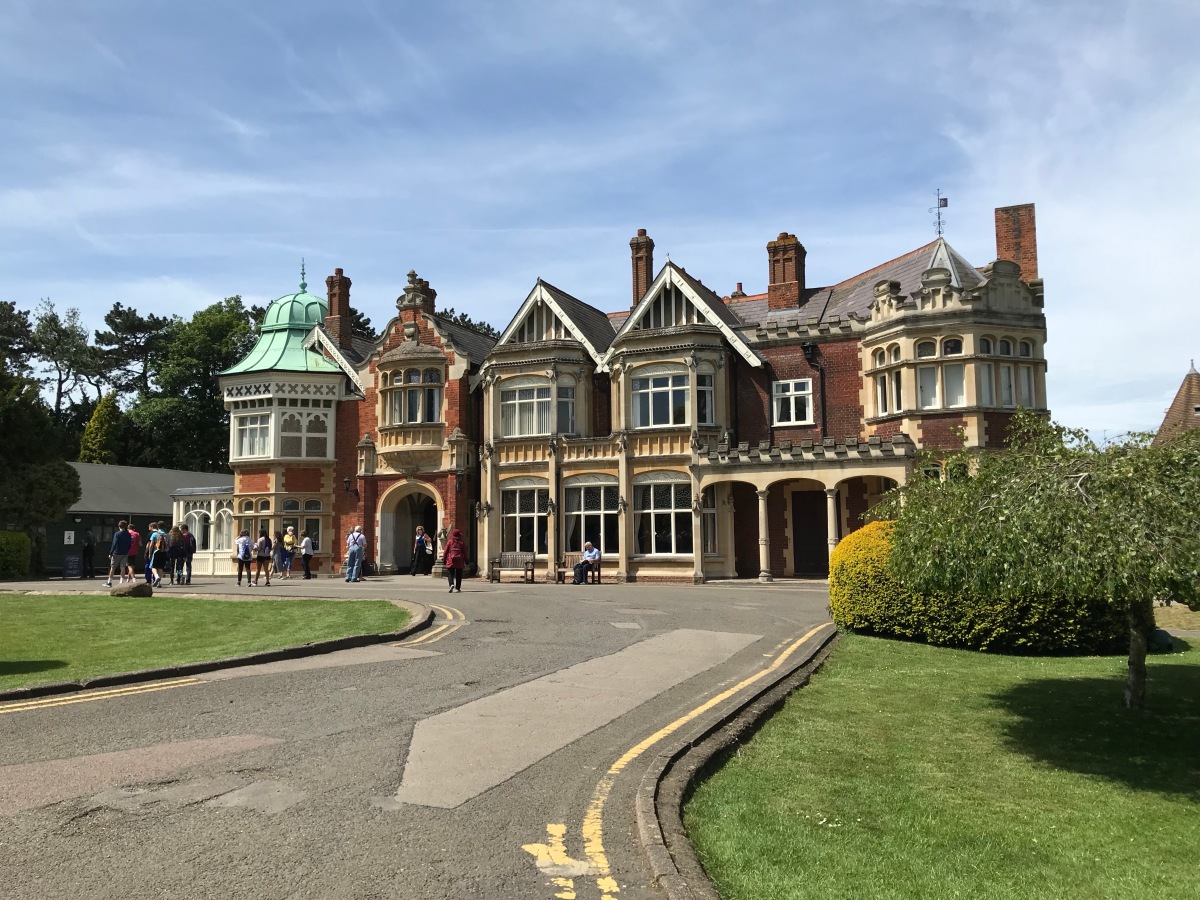 Can you keep a secret? In today’s social media culture, many people can’t. Try to imagine not discussing any information about your work with fellow employees and immediate family members for thirty years.

Welcome back to my D-Day Anniversary Tour. This summer my husband and I took a Viking Cruise which included Normandy, Paris, and London. I was impressed by our time spent at Bletchley Park, located outside of London in Buckinghamshire. The estate was the home of Sir Herbert Leon until 1938. Then it became one of the most important centers of British intelligence during World War Two.

“The greatest secrets are always hidden in the most unlikely places.”—Arnold Dahl

The British government purchased the serene fifty-five acre country estate because it afforded privacy and security. Nearby transport links to Oxford and Cambridge connected the estate to academia. Bletchley Park had its own power and water supply which guaranteed safe drinking water at all times.

No one in the surrounding community knew what was really going on at Bletchley. High chain link fences were erected around the perimeter. Neighbors thought it was a lunatic asylum. This impression was reinforced at the local pub, where brilliant and somewhat eccentric codebreakers spoke to each other in Ancient Greek. Ordinary folk who lived around the secret base were baffled by the unusual people in their midst.

The mission of Bletchley was to intercept, translate, and decrypt German communications and notify Allied troops of Nazi battle plans. Any breech of information that might get back to the Nazi’s would be disastrous. At the peak of its operation nine thousand employees worked here. All of them were asked to sign the Official Secrets Act of Britain. The penalty for careless talk could warrant imprisonment. Signs like the one posted below encouraged workers to not talk about their work. This pact of secrecy was enforced until the mid 1970’s.

Of course not all nine thousand employees worked in the beautiful Bletchley mansion. Huts were erected on the property where most of the codebreaking occurred. The huts were dark and hot inside. All windows were covered with black blinds to keep staff from knowing what work was being done inside the neighboring hut. German messages were passed from one hut to another via a makeshift wooden tunnel.

Nazi communications were written using the Enigma. This machine looked like a typewriter except it substituted one letter for another creating an encrypted message. When an encrypted message was received by another Enigma, the operator would retype the gibberish and decode the actual message. A British mathematician at Bletchley, Alan Turing invented the Bombe, a machine that cracked the encrypted Nazi’s codes, and speeded up the process.

Several Bombes were located in Hut 11 and were operated by members of the Women’s Royal Navy Service. (WRNS) The women worked eight hour shifts six days a week . Many of them were young, in their late teens and early twenties. The work was noisy as the rows of drums revolved. The smell of hot oil emanated from these machines. The women had little or no understanding of the importance of their work, but knew they had to keep each machine running. The Bombes of Hut 11 enabled the decrypting of three thousand German messages a day. Throughout the war and for years afterwards the women kept their contract of secrecy.

The work performed at Bletchley Park is thought to have shortened the length of the Second World War by two years. Winston Churchill thanked the (WRENS) for “laying the golden eggs without clucking.”