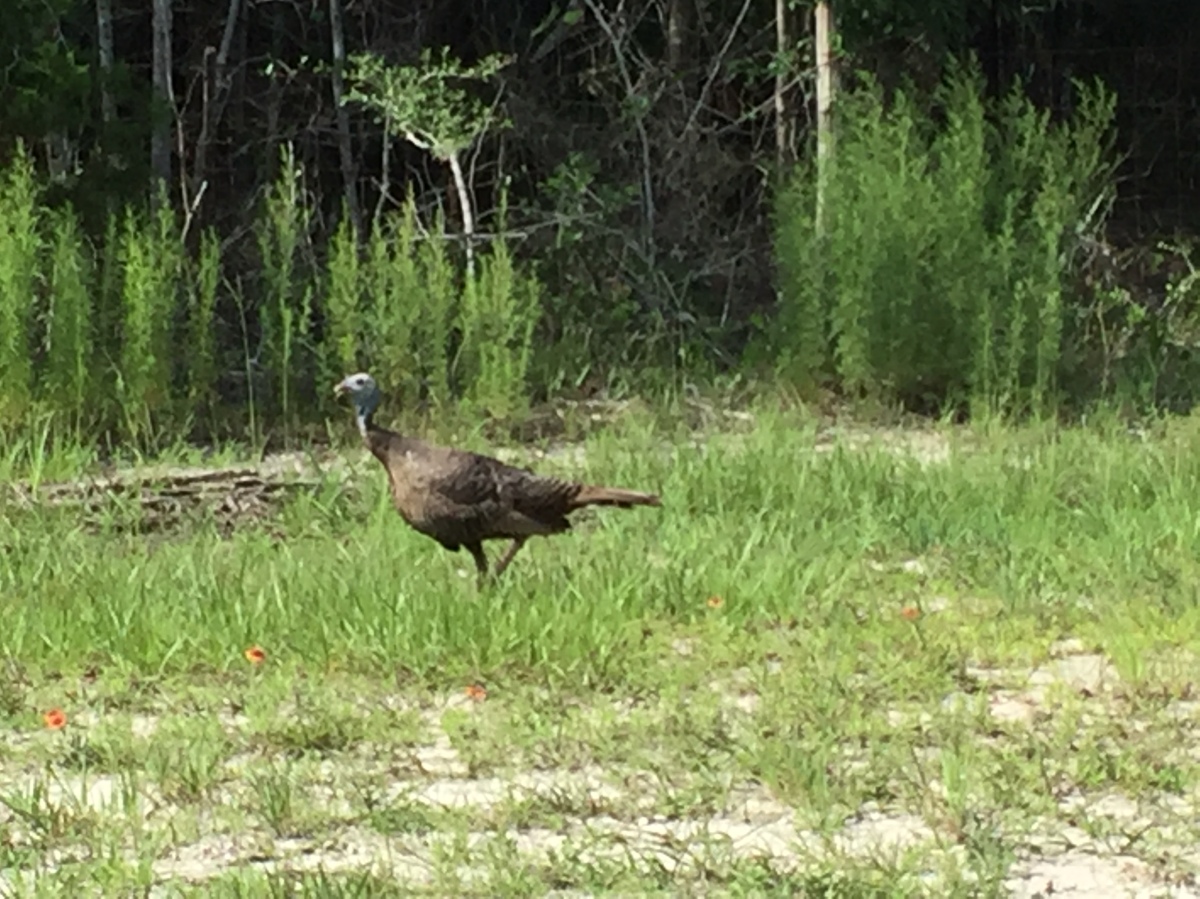 Camping during the Florida summer is not for wimps. Our trip to Faver-Dykes State Park challenged us in ways we have never been challenged before. Located in a remote area fifteen miles outside Saint Augustine, the park is known for being “off the beaten track.” We pulled our Viking trailer over the bumpy dirt road to the entrance of a small campground. As the campsite was not level, my husband, Herb made several attempts before he successfully parked our trailer in the soft sand. Soon a park vehicle stopped nearby and a ranger stepped out to welcome us. The ranger took an interest in our dog, Buddy, the best beagle ever.

Early the next morning we decided to hike the 2.6 mile Hiram-Faver Trail. Guess what? The trail was named in honor of Hiram Faver, who donated the land to the state for a park. Go figure!  On our way to the trailhead we walked by the park office. The friendly ranger who  welcomed us yesterday came out of the office to say hello. He asked where we were headed. I told him the Hiram-Faver trail. “Oh,” he said, “you better watch out for ticks out there.”

“We’re prepared, ” I boasted. I wore long sleeves and long pants and tucked my pantlegs into my socks. I also sprayed my legs with bug spray. The ranger focused his attention on Buddy. “I always put a tick collar on my dog. Then the ticks never bother him.” Suddenly I realized that Mr. Ranger was more concerned about Buddy than we were.

“Buddy is on special medication to prevent ticks from harming him,” Herb responded. At the time I wondered, how bad can it be out there?

We began hiking with Buddy in the lead. July is hot in Florida. Herb and I kid each other that real Floridians can handle the heat. But we forget that we aren’t real Floridians. We’re actually transplanted Buckeyes from Ohio, and Buddy hails from North Carolina. 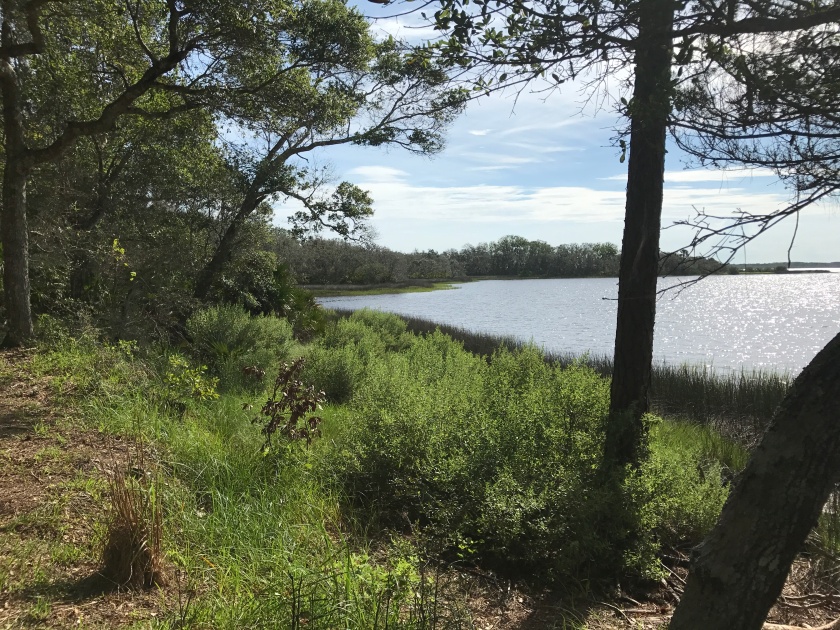 As we approached Pellicer Creek, we felt a delightful cool breeze off the water. We saw a bench and sat down to enjoy our granola bars and bottled water. Buddy had a drink, too, and relaxed in the grassy area at our feet.

I took out my cell phone to take pictures.  I noticed I had phone service. (Something not always available at the campsite.)  Herb looked across the river and spotted a cell tower. What luck! We had a great time sitting on the bench, texting pictures and checking our email. I even posted a couple of photos on Facebook.

After about twenty minutes, I noticed something crawling on the front of my shirt. “A tick!” I yelled. Herb rushed over and brushed it off. Then I spotted a tick on his pants. I brushed it off him. “Let’s get out of here.”

We hiked back toward the campsite. I still wasn’t very worried. So we saw two ticks. Big deal. We’re only a mile from the campsite. All will be well.

When we reached the campsite, we sat on the ground with Buddy and examined his belly. I lost count of the numerous ticks attached to his legs and stomach. I felt terrible. What did I do to my dog?

I grabbed the tweezers from the first aid kit and Herb and I combed through his fur with our fingers. It wasn’t easy to remove the ticks from Buddy’s skin. They were small, brown, shiny, and wanted to stay put. When I pulled the first tick out I didn’t know what to do with it. It latched on to the tweezers and wouldn’t let go. Then it started to crawl onto my hand. Yikes!

Finally I got the idea of dropping the live tick in a cup of water. It worked. I removed at least thirty ticks from Buddy. We covered the cup with a second smaller inverted cup to keep the ticks from crawling out. If possible, we wanted to keep them out of our campsite. We wrapped the tick filled cup in a plastic bag and dropped it in the nearest garbage can. Hopefully they didn’t escape.

Buddy was a trooper. He didn’t complain, and relished all the attention. Ticks are strange. Unlike other pests, you don’t feel it when they dig in to your skin. No sting, no itch. Unless you check yourself and your family from front to back and head to toe, you don’t know you have them.  I know, I removed three from my ankles.

Hikers beware! July is peak season for ticks in Florida. Nature has many lessons to teach, but we will not attend the July session of the school of ticks again.