Try to imagine what the city of St. Augustine, Florida was like in 1565. The little Spanish colony constantly suffered from Indian attacks, pirate raids, and foreign invasions. Every wooden fort they built to defend themselves either burned, collapsed in storms, or rotted away from damp conditions.

Finally, somebody discovered an amazing substance on nearby Anastasia Island. Enter, Florida’s rock of ages, coquina. Coquina is a sedimentary stone composed of tiny shell fragments cemented together with calcium carbonate. The Spanish colonists might not have known the composition of coquina, but they knew they’d found a rock. They were excited! At last they had a building material that might endure. (Maybe they heard the story of the third little pig and wanted their fort to last whenever the big bad wolf came to call. After all, bricks worked for him.) The colonists petitioned Queen Marina of Spain for funds to build a new fort. She authorized the construction of the Castillo and large scale mining began on Anastasia Island in 1671.

Looking at a piece of coquina, it’s hard to believe a rock comprised mostly of shells would be very strong. The Spanish learned that although coquina is soft when first quarried, the stone hardens as it dries. Construction of the Castillo began in 1672. There are over 400,000 blocks of coquina in the fort, all cut and set by hand. The people of St. Augustine weren’t playing around this time. They had one goal: survival.

The fort was designed by Ignacio Daza using a bastion system. Four diamond-shaped bastions project out from a walled courtyard. Each bastion contains a tower where guards can see in every direction. The second floor gun deck mounted over sixty cannons. The outer walls of the fort vary from fourteen to nineteen feet thick. The coquina rock was covered with plaster to seal out rainwater.

A drawbridge provides the only entry. Standing on the bridge, a person might think it once crossed a moat filled with alligators. Not so, the low ground around the fort was used to graze animals. The Castillo was built  as a place of refuge for the townspeople of St. Augustine. Most Spanish soldiers lived in town and shared guard duty. In a sense, the Castillo was a castle, built to protect the community in times of war. 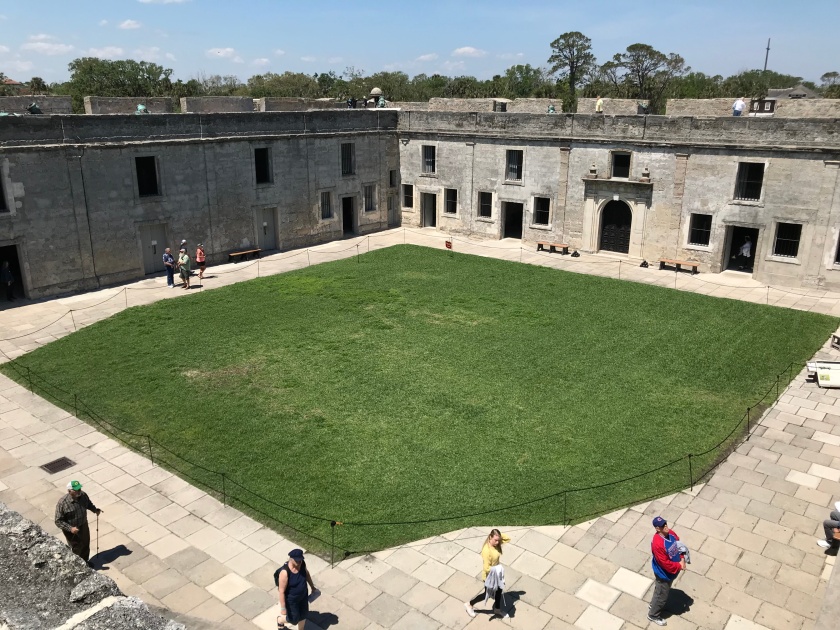 It’s amazing to think that the small courtyard housed 1,500 soldiers and civilians for fifty-one days when the English attacked St. Augustine in 1702. The rooms around the courtyard housed food and military supplies. Enemy cannonballs bounced off or got stuck in the coquina without breaking it. Their defense plan worked.

The Castillo protected St. Augustine for over two hundred years. Today the fort remains as a national monument to human determination. The monument is open every day except Thanksgiving and Christmas. Plan your visit to the Castillo de San Marco soon.