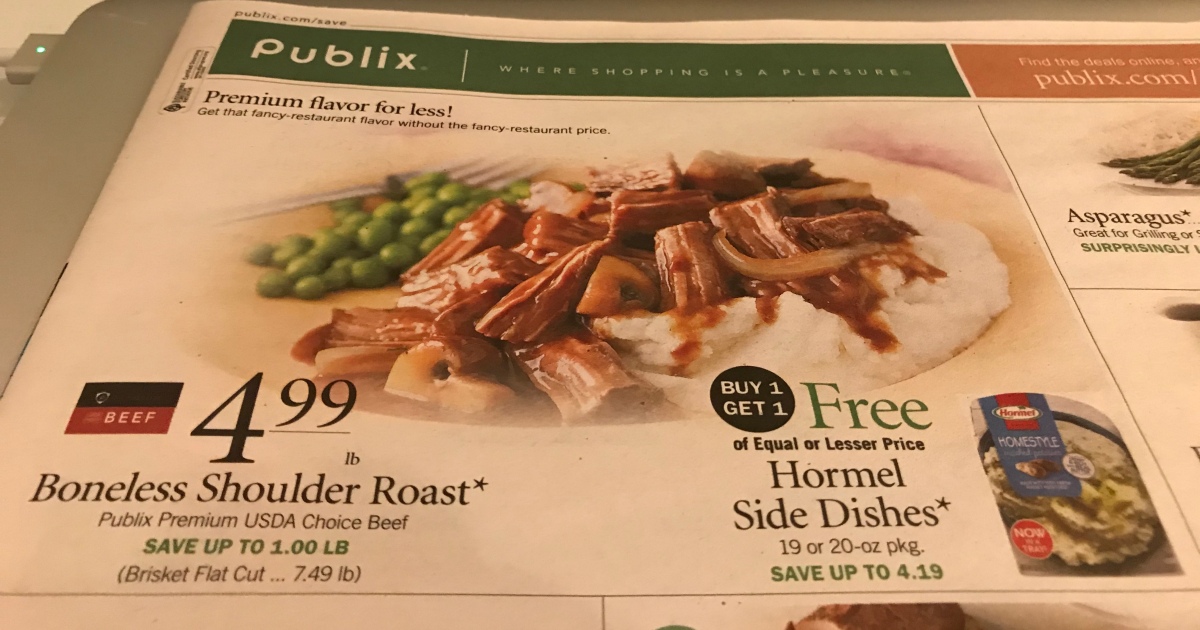 Now that the Christmas season is here, retailers are busier than ever trying to convince people to purchase their merchandise. I love to shop, but I need to remind myself that what looks good in an ad doesn’t always turn out to be the best purchase. In the past, I’ve bought clothes that looked good on a model, but didn’t complement my short frame. I’ve also had my hair cut like “that girl in the magazine,” only to be let down when I tried to style my hair at home. But one ad I can always depend upon is the Publix grocery flyer.

Publix follows all the seasons and holidays with their menu suggestions. Many of these ads also feature BOGO items. How smart! For example, my featured image of pot roast and mashed potatoes includes an inset announcing that the items needed to create this scrumptious dish are also on sale.

Even though I’d been trying to lose weight for months, I took one look at the pot roast and thought, I want that. I began to search the web for pot roast recipes which included mushrooms. I did not come up empty.

Recipe in hand, I drove to my neighborhood Publix to buy the ingredients before the sale ended. Later, when I was putting everything in the fridge, I told my husband, “I’m making something special this Sunday, but you won’t believe the money I saved at Publix.”

After being forced to eat nothing but big salads because I was the one a diet, Herb looked up from his book, “Sounds good, does the word special mean high-calorie comfort food?”

At long last, Sunday morning arrived. I followed the recipe and mixed up the ingredients in the crock pot before church. Upon my arrival home, the aroma from the roast made my mouth water. Then I received a text from my son, “Sorry Mom, I’m not going to make it to lunch today. Something’s come up.”

Then a second text, this one from my daughter. “Dad and I are tied up at the car dealership. We’re going to be late for lunch.”

“Oh no. I hope the pot roast is as good as it smells, because we’re going to be eating it for the next week.” I continued preparing the sides while my brother set the table.

We took our seats and gave thanks. Our plates looked just like the image in the flyer. I took my first bite. “I’m forgetting about calories today. This is delicious.”

Later, the rest of my family trickled in for the leftovers. Everyone thought the meal was outstanding. For once, I did not feel let down by the power of advertising.

If you are looking for some real comfort food this December, you can find the recipe for Slow-Cooker Pot Roast at this link. If time is a concern, it can be prepared with the crock pot setting on high.

Bon Apetit! Let’s enjoy counting our blessings instead of calories this holiday season. Don’t worry, there will be plenty of dieting foods on sale in January.